The sound waves emitted by fin whales can be used to investigate the crust and complement seismic studies. 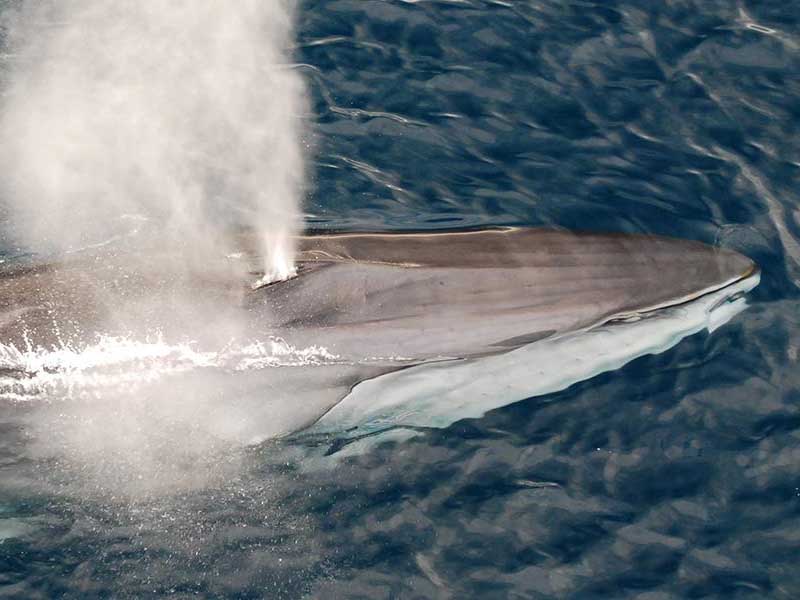 Scientists investigating a seismic fault line off the US West Coast now have an unexpected ally in their quest to image the depths of the ocean crust: fin whales.

Fin whales ( Balaenoptera physalus ) are giants, 20 to 25 meters long, whose songs can be heard up to 1,000 kilometers away and echo in the sea with the same intensity as a ship’s engine. A study published on February 12 in Science concludes that the sound waves from the songs can be used to generate images of the seabed down to a depth of 2.5 kilometers.

In obtaining images of the ocean floor, essential to study seismic mechanics or the ability to store carbon, large air guns are often used that send sound bursts towards the ground. The sound waves penetrate the crust and return to instruments installed on the seabed with information about the structures through which they have propagated. But such measurements are expensive, and the noise from gunfire can disturb marine mammals that use sounds to communicate.

“In fact, it’s great to have a new source of information,” says study co-author Václav Kuna, a seismologist at the Institute of Geophysics of the Czech Academy of Sciences.

Kuna, who was then working at Oregon State University, was studying earthquakes associated with the Blanco transform fault off the coast of Oregon in 2012 and 2013 when he detected strange readings on seismic instruments installed on the seabed. The readings matched fin whale song frequencies.

According to Emily Roland, a marine seismologist at the University of Washington who was not involved in the study, whale songs often show up in instrument records, but seismologists often see them as a nuisance. Kuna, however, noticed that some signals only appeared on the seismometers of the seafloor instruments, which only detect vibrations, but the corresponding sounds were not picked up by the audio microphones. Therefore, the signals did not come directly from the rorquals, but were reflected echoes from inside the crust.

To use such signals for imaging purposes, the Kuna had to determine the location of the whales, which was possible because each song generated two sets of waves: one that traveled directly to the seismic station on the ocean floor, and another that they bounced between the bottom and the surface before reaching the same station. By comparing the arrival times of both sets of waves, Kuna was able to calculate the approximate location of the cetaceans.

Fin whales sing by emitting strong one-second pulses, a pattern that favors seismic imaging because the pulses are easier to analyze than continuous noise, explains William Wilcock, a marine geophysicist at the University of Washington who has not participated in the study but has used seismic instruments to track whales. Fin whales are found virtually everywhere except in the ice-covered areas of the Arctic, he notes, so their songs “could be used in numerous regions.”

Would you like to take courses in Geology, Geophysics, Geotechnical Mining and Civil Works?

We have 2 options for you

Membership platform that includes six services in the areas of Civil Engineering, Geology and Mining.